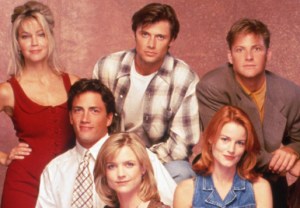 As if it wasn’t bad enough that Melrose Place has been dropped from Netflix (as of July 1), the iconic Fox drama is about to be dragged through the mud by Lifetime.

The network — already responsible for spinning the “unauthorized” tales of Full House and Saved by the Bell — is preparing to give viewers a behind-the-scenes look at the Darren Star-created series, which ran for 226 episodes from 1992 to 1999. (That’s where the saga ended, by the way. Despite what you’ve heard, there was never a short-lived reboot on The CW starring Katie Cassidy.)

Although The Unauthorized Melrose Place Story has yet to receive a premiere date, its announcement arrives on the heels of Lifetime tackling Beverly Hills, 90210, of which Melrose was a spinoff.

But as long as this is unavoidable, let’s talk casting: Which actors and actresses should step into the legendary roles of Heather Locklear, Marcia Cross and Grant Show, among others? Drop a comment with your every thought, no matter how crazy, below. (Don’t forget, this is Melrose Place we’re talking about here.)