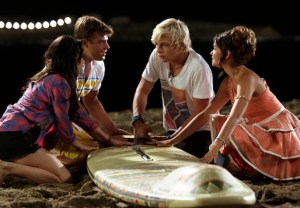 Disney Channel’s Teen Beach Movie sequel made a decent, if not record-breaking, splash on Friday night.

Teen Beach 2 — which drummed up more than a little controversy/backlash with its twisty ending (that I thus far have remained unspoiled for!!!) — drew 5.8 million total viewers in its debut, down 30 percent from the original time-trippy flick yet still ranking as cable’s No. 1 movie of 2015 to date.

TVLine readers gave the follow-up an average grade of “B” — while at least a few of you/your rugrats think there’s a way to squeak out another sequel.

Leading out of the original movie, the series premiere of Best Friends Whenever drew 3.5 million total viewers, down 40 percent from what Liv and Maddie netted after Teen Beach Movie almost two years ago.