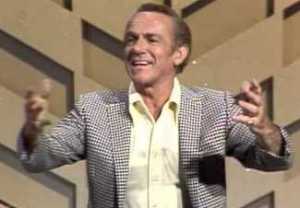 Jack Carter, a comedian whose nearly seventy-year career encompassed fare as diverse as Cavalcade of Stars and iCarly, is dead at the age of 93.

Carter died of respiratory failure on Sunday, June 28, at his home in Beverly Hills, Calif., our sister site Variety reports.

The actor — who also worked as a singer, director and emcee — got his TV break in Milton Berle’s Texaco Star Theatre in 1948, from which he built a long career as a character actor who appeared in TV fare as varied as I Dream of Jeannie, Fantasy Island and Desperate Housewives.

A contemporary of Jimmy Durante, Jerry Lewis and Dean Martin, Carter hosted the Cavalcade of Stars variety show for two years in the late 1940s before helming his own NBC series, The Jack Carter Show, for three years. He also appeared on The Ed Sullivan Show more than 50 times.

His recent small-screen credits include New Girl, Go On and Shameless.

Carter is survived by his wife, Roxanne; his sons, Michael Carter and Chase Carter; his daughter, Wendy Carter; and his grandchildren, Jake and Ava.