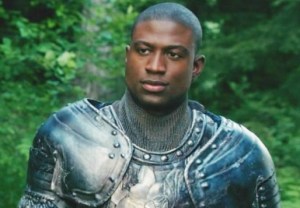 Someone better make room at the Round Table, because Lancelot is heading back to Once Upon a Time.

Per EW.com, Sinqua Walls is reprising his knightly role in the ABC drama’s upcoming fifth season, though it’s unclear whether he’ll appear in the present or merely in flashbacks. As you may recall, Cora allegedly killed Lancelot in order to assume his form back in Season 2.

Lancelot’s appearance actually makes quite a bit of sense, as the casting call for the character of Guinivere specifically references her crush on the knight.

* TBS has ordered Funny or Die Presents: America’s Next Weatherman, premiering Aug. 8 at 11/10c. The winner of the hourlong comedy-reality series, also produced by Mark Burnett, will get $100,000 and will forecast the weather for CNN’s New Day.

* LeBron James will guest-star in Season 2 of Starz’s Survivor’s Remorse, according to The Wrap. James currently serves as an executive producer.