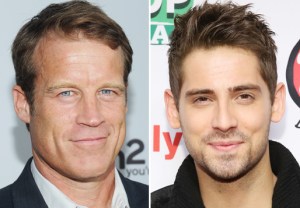 Girlfriends’ Guide to Divorce has found the cure for what ails Abby: a strong dose of Mark Valley, to be administered semi-regularly throughout Season 2.

Valley’s TV credits include Body of Proof, Fringe, CSI, Human Target and Days of Our Lives.

In other casting news, Baby Daddy‘s Jean-Luc Bilodeau will guest-star in a Season 2 episode as Adam, a handsome, young dude Alanna Ubach’s Jo meets on Tinder.

Also: Joanna Vannicola (Being Erica) will recur as Jonathan, an androgynous power wedding planner (but for whom?); Henderson Wade (Criminal Minds) will recur as Walt, Max and Ford’s manny who helps Abby in a pinch; and Susan Hogan (Night Heat, Battlestar Galactica) will guest-star as Carol, mother of Delia’s wealthy hook-up, Gordon.

The series is currently in production on Season 2.