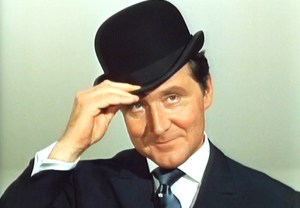 British actor Patrick Macnee, most recognizable to American audiences for playing secret agent John Steed in the 1960s cult-favorite TV series The Avengers, has died of natural causes at age 93.

He briefly reprised his iconic, umbrella sword-wielding role for the short-lived mid-‘70s revival The New Avengers.

Macnee’s post-Avengers TV credits included the title role in ABC’s CIA series Gavilan, the 1989 miniseries Around the World in 80 Days, voicing the opening credits for TV’s original Battlestar Galactica, the CBS drama P.S.I. Luv U, the syndicated action-adventure series Thunder in Paradise and, most recently, a 2001 episode of Frasier.

Do you have a favorite role of Macnee’s? Drop your memories of the acclaimed actor in a comment below.