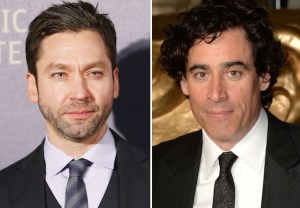 The titular master magician and renowned author have been cast for Houdini & Doyle, a supernatural adventure drama to debut on Fox sometime in 2016.

An international co-production between the UK’s Big Talk and Canada’s Shaftesbury — and counting House creator David Shore among its executive producers —  the 10-episode drama will star Michael Weston (House) and Brit actor Stephen Mangan (Episodes) as Harry Houdini and Sir Arthur Conan Doyle, who respectively debunked and had a fascination with the paranormal. Together, they ally with Scotland Yard to investigate inexplicable crimes that have a supernatural slant.

Canadian Rebecca Liddiard (Netflix’s Between) also stars, as Adelaide Stratton, the first female constable ever to work for the London Metropolitan Police Force.

“I’ve long been intrigued by both Houdini and Doyle; men who were ahead of their time, each fascinating in their own right. But the idea that these two, seemingly so different, could have been friends is almost too perfect,” David Shore said in a statement. “In Michael and Stephen, we have found two incredible actors that embody the intelligence, humor and mystique of these men who, even when viewed through the lens of history, are larger than life.”

Outside of the States, Houdini & Doyle will air on the UK’s ITV in Spring 2016, followed by Canada’s Global.

Houdini? Doyle? Together?! Are you intrigued by the team-up?