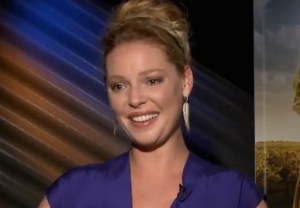 When is a “swirling” rumor not a rumor at all? When it’s merely TVLine suggesting that Grey’s Anatomy would be wise to welcome back Katherine Heigl to the role she created back in March 2005.

Nonetheless, Entertainment Tonight invited Heigl to share if there is any truth to the “rumor” that she will return as Dr. Izzie Stevens. “There is not, I’m sorry,” she states.

More interestingly, perhaps, is what Heigl says (or doesn’t say) when the reporter then asks if she would consider ever scrubbing back in at Grey Sloan Memorial. Because whereas just three years ago she told TVLine, “If they want me to return for an arc, I would love to know where Izzie is now,” her current take… well, it can be found at the 20-second mark in the video below.

Also in the ET segment: Heigl — who is out with Ben Barnes promoting the indie Jackie & Ryan — weighs in on McDreamy’s recent death and her wishes for the ABC serial’s future.