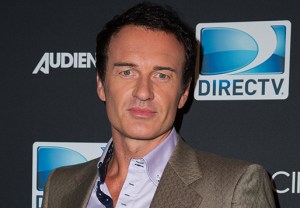 The Nip/Tuck alum has booked a recurring role on the cabler’s upcoming alien drama, our sister site Deadline reports.

Adapted from Whitley Streiber’s best-selling novel Alien Hunter, the 13-episode series chronicles a Philadelphia cop’s search for his vanished wife — an odyssey that will lead him to a clandestine government organization that hunts a sect of ruthless, possibly extraterrestrial terrorists.

McMahon will play McCarthy, an unhinged drug addict and Hunter cell leader who has an affinity for house music and violence. He joins a cast that includes Nathan Phillips (The Bridge) and Britne Oldford (American Horror Story).

McMahon can be seen later this year in Syfy’s Childhood’s End, a six-hour miniseries adaptation of the Arthur C. Clarke novel. Hunters is slated to premiere in 2016.

Your thoughts on McMahon’s casting? Drop ’em in a comment below.