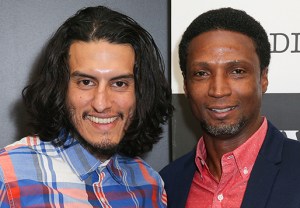 Elvis Nolasco and Richard Cabral — who played Carter Nix and Hector Tonz, respectively, in the ABC anthology drama’s first season — will be back for its sophomore run.

“After playing individuals on the fringes of the law, Season 2 will offer complete role reversals for both Elvis and Richard,” series creator John Ridley told our sister site Deadline. “Elvis playing a fundamentally good man scapegoated by the system in which he works. Richard as someone who takes it upon himself to stand for the rights of others, even if it means he stands alone.”

Nolasco and Cabral join Season 1 alumni Felicity Huffman, Timothy Hutton and Regina King, all of whom will return for the series’ second season.

* NBC has released a short teaser for Heroes Reborn, premiering Thursday, Sept. 24. Press PLAY on the brief video below, which poses a very important question: Where are the heroes?

* Showtime’s online streaming service, launching July 12, will be available to Hulu subscribers (for an additional $8.99/month), and is now available for sign-up/purchase.

* Callan McAuliffe (Homeland) has landed the lead role in Beyond, ABC Family’s upcoming drama pilot about Holden, a young man who wakes up from a coma after 12 years and discovers new supernatural abilities that propel him into the middle of a dangerous conspiracy. Jordan Calloway (Unfabulous), Dilan Gwyn (Da Vinci’s Demons), Romy Rosemont (Glee), Michael McGrady (Ray Donovan) and Burkely Duffield (House of Anubis) round out the cast.

* CBS will air unaired episodes of cancelled series The Millers and The McCarthys in two-hour blocks, beginning Saturday, July 4, at 8 pm.