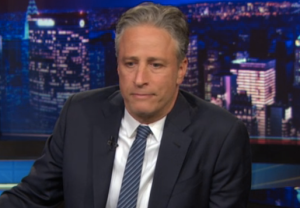 Jon Stewart opened Thursday’s Daily Show by confessing to viewers, “I didn’t do my job today.”

“I have one job — and it’s a pretty simple job,” he said.  “I come in in the morning, we look at the news, and I write jokes about it. And then I make a couple of faces… and then I’m out the door. But… I’ve got nothin’ for you, because of what happened in South Carolina. I honestly have nothing other than just sadness.”

Watch the full video below: