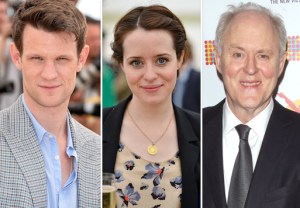 Your Majesty, the doctor will see you now.

Matt Smith (Doctor Who) and John Lithgow (How I Met Your Mother, Third Rock from the Sun) will co-star in Netflix’s original series The Crown.

They join Wolf Hall‘s Claire Foy as Her Majesty Queen Elizabeth II in the drama about the monarch’s decades-spanning reign and the Prime Ministers who shaped Britain’s post-war destiny.

The 10-episode series — penned by Peter Morgan (The Queen, Frost/Nixon), with Stephen Daldry (Billy Elliot, The Hours) directing some installments —will debut in 2016.