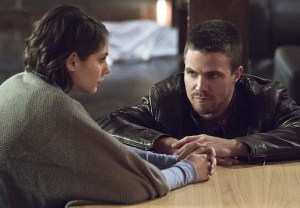 Treating fans to a Thursday morning Twitter Q&A, Amell responded to a request to sum up the Season 4 premiere in three words, thusly:

Meaning, of course, that Thea — who at season’s end adopted her own costumed persona — is seemingly in need of some help, or guidance, in her brother’s absence.

Maybe the infamous side effects of the Lazarus Pit waters that brought Thea back to life after Ra’s al Ghul slayed her are beginning to manifest themselves? And plucky Thea is going a bit… mad?

Earlier in the week, the Arrow writers shared this peek at the premiere script, while obstructing our view of the title — though my Chloe O’Brian-esque zoom-in abilities suggest that it is a single word of 10 letters or less:

What are your own theories about Amell’s cryptic tweet?