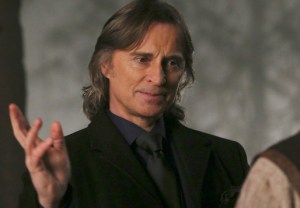 Tick-tock, Dearie! If you’re a young actress who can brandish a Scottish burr, Once Upon a Time is looking for you.

TVLine has learned that for an early Season 5 episode, the ABC drama is guest-casting the role of Rumplestiltskin’s mother, Evanna, to appear in flashbacks.

To date, precious little is know about Evanna — she was already gone at the that time Rumple’s unscrupulous father Malcolm left the lad to be tended to by spinner spinsters (which really should be the name of an all-girl band), only to resurface for the gents’ first trip to Neverland.

But this much TVLine can now reveal: Once is seeking an actress in her mid-20s to early 30s to play the “stunningly beautiful” Evanna, who is described as “plucky, strong and imbued with an unshakeable sense of self-confidence.” Evanna sometimes acts before she thinks, though unlike her son she never acts out of pure self-interest. Rather, her noble spirit stands in stark contrast to the now-dark soul of her offspring.

Candidates must also be able to pull off a Scottish accent.