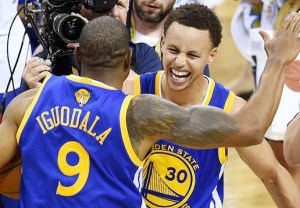 ABC’s coverage of the sixth and deciding game of the NBA Finals — in which the Golden State Warriors netted their first championship since 1975 — drew 23.3 million total viewers and an 8.9 demo rating on Tuesday night (per finals), up 12 and 19 percent from Game 5 and improving on last year’s clincher.

Opposite the huge hoops….