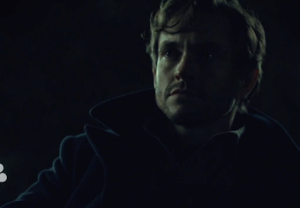 Hannibal‘s Will Graham is a lot of things — moody, meditative, maybe a wee bit deranged — but you wouldn’t really expect to find Pharrell’s “Happy” on his iTunes “25 Most Played” list.

So how come he’s so eager to show off his smile in the following exclusive preview video from Thursday’s episode (10/9c on NBC)?

OK, OK, maybe we’re being a tiny bit misleading — nobody’s been truly jovial in Bryan Fuller’s twisted dreamscape since… ever? — but Hugh Dancy’s character is indeed making a new friend during his European vacation, so there’s that.

Press PLAY to watch the scene play out, then share your thoughts in the comments!