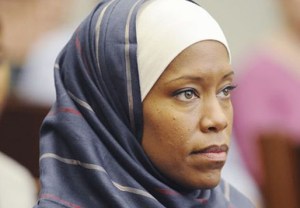 After exploring Muslim faith in American Crime‘s freshman season, Regina King will be back to grapple with another hot-button issue in Season 2.

The actress is set to return for the ABC anthology drama’s sophomore season in a series-regular role, the network announced Tuesday.

King — who played the devout Muslim sister of drug addict Carter Nix in Season 1 — joins series stars Felicity Huffman and Timothy Hutton, who will also return for the second go-round.

“Michael McDonald and I couldn’t be more excited to have Regina back for Season 2 of American Crime,” series creator John Ridley said in a statement. “She’s phenomenal in all regards, and is going to be at the center of a story that deals with physicality, sexuality and societal boundaries with the same urgency as our first season dealt with race and faith. We’ve been blessed with the opportunity to speak on subjects as no other show does, and a cast which can do so with such a high degree of emotional honesty.”

As TVLine exclusively reported earlier this month, much of the Season 2 action is expected to take place at an elite prep school in the midwest that boasts a disparate student body, including a gay basketball star. According to Ridley, the sophomore season will “deal a lot more with class,” as well as “gender issues, sexual orientation and sexual identity.”

King also recently signed on as a series regular for Season 2 of HBO’s The Leftovers.

Are you happy to hear King is continuing with American Crime? Hit the comments!