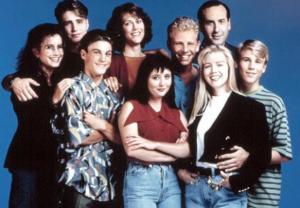 Break out the scrunchies and the quilted vests — Lifetime has chosen Beverly Hills, 90210 as the latest classic TV show to spawn a behind-the-scenes, tell-all movie, TVLine has confirmed.

The Unauthorized Beverly Hills, 90210 Story will “show the roller coaster ride of the program’s first four seasons, highlighting the drama between cast members and producers both on and off-set,” according to the network — and will chart its several near-cancellations and eventual “massive success and imprint in the cultural zeitgeist.”

Will you be revisiting West Beverly High via Lifetime’s latest movie? Sound off below!