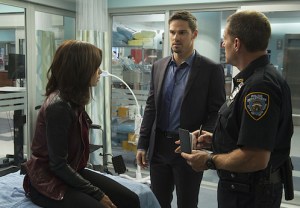 The CW’s Beauty and the Beast opened Season 3 with 880,000 total viewers and a 0.3 rating (per finals), ticking up just a bit in audience versus both its sophomore premiere and finale (which aired on Mondays), while matching their demo numbers.

Leading out of that, the iHeart Pool Party (880K/0.3) was up 23 percent in audience/flat in demo versus last year.

FOX | Bones ended Season 10 with 5.1 million viewers and a 1.2 rating, up a tenth week-to-week; TVLine readers gave the finale an average grade of “B.” Wayward Pines‘ big bombshells drew 4.2 mil/1.2, up a tenth and averaging a grade of “A-.”