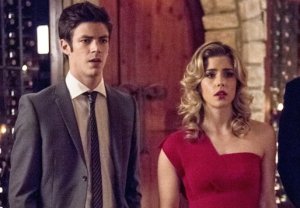 Assuming for a moment that The Flash snuffs and survives that singularity/black hole thingamabob that was threatening Central City (if not the world) at the close of Season 1, his reward will be a “familiar” yet brand-new love interest.

TVLine has learned that for Season 2, the CW hit is casting the major recurring role of Wendy, a “spunky, fun and funny” romantic interest for one Barry Allen.

A cop for the Central City PD, Wendy is described as bright and scientific-minded — more specifically, “Think ‘Felicity Smoak’ from Arrow,” the casting call reads.

As The Flash‘s freshman run drew to a close, Barry’s secret had once again but truly been revealed to his longtime crush Iris, right before she and a “To heck with the future!” Eddie reconciled. Detective Thawne then died (“left us”?), meaning an Iris/Barry pairing, though fated, is probably “too soon” just yet.

Season 2 of The Flash will again airing Tuesdays at 8/7c; Wendy will be introduced in Episode 2.

What are your thoughts on Barry getting his own “Felicity”? Any casting ideas?