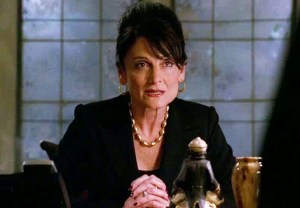 Cristine Rose, who played the manipulative Angela Petrelli — mom to Nathan (Adrian Pasdar) and Peter (Milo Ventimiglia) — in the original NBC series, will reprise her role in the upcoming revival, according to E! News.

Though details of Rose’s return are being kept under wraps, a quick refresher on her powers should be enough to get you excited for her reappearance: Not only could the devious diva see the past and future via her dreams, but she could also enter other people’s dreams for her own dark purposes.

Are you excited for Mama Petrelli’s return? Drop a comment with your thoughts below.