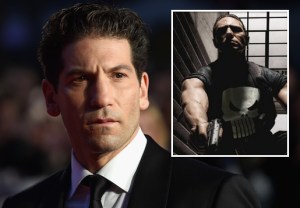 Daredevil is due for some punishment in Season 2.

The Walking Dead alum Jon Bernthal has joined the Netflix superhero series in the role of The Punisher, one of Marvel’s most popular characters, Marvel.com reports.

Per Marvel lore, Frank Castle (born Francis Castiglione) was a well-decorated Marine who saw his wife and children killed during a Central Park picnic, after they inadvertently witnessed a gangland execution. When the corrupt police force proved unable to follow up, Frank adopted the persona of The Punisher to exact his revenge, and more.

Season 2 of Marvel’s Daredevil — under the care of new showrunners Doug Petrie (Buffy the Vampire Slayer, American Horror Story) and Marco Ramirez (Sons of Anarchy) — will be available for streaming in 2016.