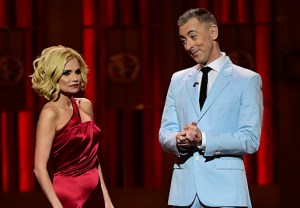 CBS’ broadcast of the Tony Awards on Sunday night drew 6.9 million total viewers and a 0.9 demo rating, down 9 and 25 percent year over year and hitting an all-time low in the demo.

The kudoscast’s previous demo low (1.0) was set in 2012, during Neil Patrick Harris’ third turn as host (and with no NBA Finals in the mix)

Airing opposite the Tonys, ABC’s coverage of the NBA Finals did 18.8 million and a 7.3 (per finals), up 25 percent from last year’s Game 2 match-up.

Versus Thursday’s Game 1, Cavs/Warriors was up 6 percent.