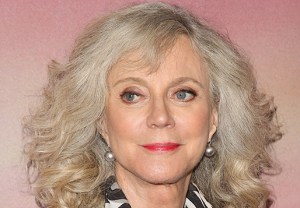 It’s all about the Benjamins for Blythe Danner — or so her next role would have us believe.

The actress has been cast in Madoff, ABC’s upcoming miniseries about disgraced financier Bernie Madoff.

Starring Richard Dreyfuss as the titular former stockbroker, the drama project — which is inspired by Brian Ross’ book The Madoff Chronicles — will examine Madoff’s rise and fall, leading to his 150-year prison sentence in 2009 for operating a $65 billion Ponzi scheme.

The actress joins a cast that includes Frank Whaley (Ray Donovan), Erin Cummings (Pan Am) and Tom Lipinski (Suits). Danner’s recent TV credits include The Slap and Up All Night.

* Comedy Central has renewed This Is Not Happening — its Ari Shaffir-hosted storytelling series — for Season 2. The project, which features stand-up comics telling stories in front of a live audience, will unveil eight new episodes next year.

* The iHeartRadio Music Awards, which previously aired on NBC, will move to Turner cable networks next April, with a simulcast airing live on TBS, TNT and truTV.

* MTV has unveiled a new trailer for Scream, now featuring the spooky masked killer who will terrorize the teens of Lakewood. Press PLAY below for another sneak peek at the series, which debuts Tuesday, June 30, at 10/9c.