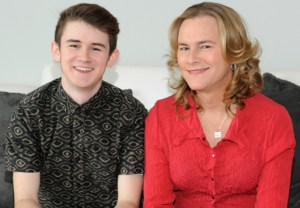 Like a scene out of Lizzie McGuire‘s first season, the premiere of ABC Family’s Becoming Us features an awkward moment in which a character fumbles her way through the still-unfamiliar world of bra-shopping. Only the character in question isn’t some naïve, boy-crazy tween; she’s a middle-aged transgender woman named Carly.

The Ryan Seacrest-produced reality series, which premiered Monday, explores the relationship between Carly and her son Ben, a teenage photographer with a lot on his mind. We also meet Ben’s mom Suzy, to whom Carly — formerly known as Charlie — was married for 16 years, and Sutton, Ben’s newly engaged sister. (In an interesting twist, Ben’s girlfriend Danielle also has a father who’s transitioning.)

Despite a few scattered moments of levity — like when Ben’s friend remarks that Carly’s “pretty hot,” or when Ben recalls noticing that his dad was growing “like, real boobs” — the first hour of Becoming Us is downright heavy. In a particularly heartbreaking moment, Carly admits, “I wish I could have been a better husband,” followed by Danielle’s father saying that he “wouldn’t wish a gender conflict on anybody,” calling it a “nightmare.” (For the record, Danielle’s father is sticking with a male pronoun for now.)

But the real emotional whammy comes when Carly reveals her plans to undergo gender reassignment surgery: “My boy parts are going to become my girl parts,” Carly explains, to which Ben replies that he’s “even more pissed” now because, in his mind, “It’s kind of official my dad is gone.”

It’s in those real moments that Becoming Us exhibits its true value. It’s not merely a PSA explaining why everyone should love and accept transgender people in a post-Caitlyn Jenner world; it’s an honest look at a real family dealing with monumental change.

And the process isn’t always pretty.

Did you enjoy the first episode of Becoming Us? Will you return next Monday? Grade the premiere below, then drop a comment with your full review.