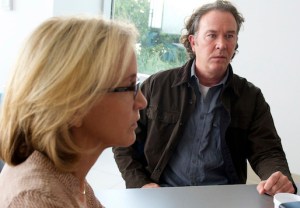 Racial politics will take a backseat to issues involving class and sexuality when American Crime returns with its second season next year.

“[In Season 1] we dealt with race and faith; in Season 2 we want to deal a lot more with class,” exec producer John Ridley tells TVLine. “We want to deal with gender issues, sexual orientation and sexual identity.”

The acclaimed drama will also shift its setting from Northern California to “the midwest” and feature a different “inciting incident,” according to Ridley. (TVLine has learned that much of the Season 2 action is expected to take place at an elite prep school that boasts a disparate student body, including a gay basketball star.)

“It’s going to be a whole different set of circumstances,” adds Ridley. “We’re hoping that we can not only make it provocative, but humanize people as well. If there’s one thing that American Crime did very well, it took issues that are generally just a headline and put faces on them. I’m hoping we can do that in the second season.”

Season 1 regulars Timothy Hutton and Felicity Huffman will be back for Season 2, playing completely different characters. And if Ridley has his way, more Crime vets will join them. “We’re still trying to work out people’s schedules and work out deals,” he says, “[But] I would love to get as many of them back for the second season as I can.” (With reporting by Rebecca Iannucci)