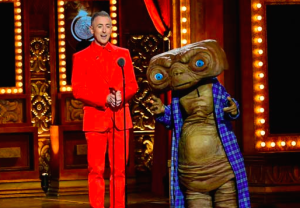 While the Tonys were being handed out Sunday night, TVLine wasn’t just watching the awards, we were deciding the winners — or, in some cases, “winners” — in a few categories of our own invention. So which performers and performances from the black-tie back-slap made the cut — and which should have been cut? Read on, find out and — best of all — hit the comments to weigh in yourself!

CHEEKIEST NUMBER | So energetic that it left us pooped just from watching, Brian d’Arcy James and Brad Oscar’s performance of “A Musical” from Something Rotten! mercilessly mocked the sort of dialogue-free song-and-dance shows that leave audiences with no choice but to ask, “Why aren’t they talking?” You know, the kinda shows that leave you miserable. Sorry, misérables.

BEST COLOR COORDINATION | Or Worst Communication by Two Presenters’ Stylists? Or was it a joke we didn’t get? You be the judge. Whatever the category you select, Anna Chlumsky and Debra Messing wore pretty much the same dress — and totally the same color dress — to hand out the Tony for Best Featured Actor in a Play to Richard McCabe (The Audience).

BUBBLIEST PERFORMANCE | Audrey Hepburn, High School Musical grad Vanessa Hudgens is not. (Is anyone? Rhetorical question.) Yet we couldn’t help getting a little tipsy from the ingénue’s spirited rendition of “The Night They Invented Champagne” with her Gigi castmates. So yes, we will drink to her!

MOST LIKELY TO SUCCEED | So emotionally open was 11-year-old Sydney Lucas in her performance of “Ring of Keys” from Fun Home that she rendered the narration that bogged down the scene’s opening wholly superfluous.

BEST KELSEY GRAMMER IMPERSONATION | Suddenly sporting dark hair and a thick brown beard, Sting looked less like himself than he did the erstwhile Frasier Crane. Runner-up: Grammer himself, volcanic as Captain Hook while performing “Stronger” from Finding Neverland with Glee’s Matthew Morrison. (Speaking of Morrison… What. A. Vocal. Da-amn!)

GRANDEST DAME | Even if you had never heard of Chita Rivera before, the glamorous octogenarian’s riveting performance of “Love and Love Alone” from The Visit would have left no doubt in your mind why she was a legend, much less a Tony nominee.

BOLDEST PREDICTION | Lisa Howard didn’t just raise the roof, she brought down the house with the showstopper “Jenny’s Blues” from It Shoulda Been You. Betcha anything we’ll be seeing her among next year’s Tony contenders.

BEST AD LIB | Yeah, yeah, we know it had to have been rehearsed. Still, it was cute when, before announcing the recipient of the Carnegie Mellon Excellence in Theatre Education Award recipient, Joe Manganiello asked Darren Criss who’d inspired him, and the Glee alum “earnestly” replied, “I’ve seen Magic Mike, so I’ve learned a lot from you, buddy.”

TENSEST MOMENT | Having had some trouble reading the TelePrompter during her introduction of the Finding Neverland number (with Nick Jonas and Kiesza), Jennifer Lopez looked about as relieved when she was done as we imagined she would when she got un-cinched from her tight top at the end of the night. 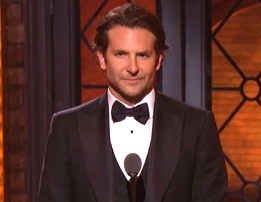 BIGGEST HEAD-TURNERS | Not bad for an Elephant Man — Bradley Cooper cleaned up nice. Soon-to-be Hedwig Taye Diggs looked like… well, Taye Diggs. (In other words, flawless.) And short of Idina Menzel’s Elphaba in Wicked, Best Featured Actress in a Play winner Annaleigh Ashford (You Can’t Take It With You) was the prettiest thing in green we’ve ever seen. However, the award for best-dressed has to go to country singer Jennifer Nettles (Chicago), narrowly beating out golden girl Amanda Seyfried.

BIGGEST NO-BRAINER| After the hoopla surrounding the Broadway League’s decision not to dim the lights of Broadway for the late Joan Rivers — and its subsequent reversal of that decision — was there any doubt that she’d be included in the Tonys’ In Memoriam tribute?

BEST EXIT | Best Leading Actress in a Musical winner Kelli O’Hara (The King and I) concluded her acceptance speech by excitedly announcing, “I’m gonna do the worm!” and dancing off stage (no chorus boys required). Side props to Chenoweth, also nominated in O’Hara’s category: Following her loss, the On the Twentieth Century star playfully feigned bitterness as she threw to the next commercial.

OK, your turn. What did you think of the Tonys? What alterna-categories did we miss? Hit the comments. (And see below for a list of the major winners.)

Best Revival of a Play
Skylight

Best Revival of a Musical
The King and I

Best Performance by an Actor in a Leading Role in a Play
Alex Sharp, The Curious Incident of the Dog in the Night-Time

Best Performance by an Actress in a Leading Role in a Play
Helen Mirren, The Audience

Best Performance by an Actor in a Featured Role in a Play
Richard McCabe, The Audience

Best Performance by an Actress in a Featured Role in a Play
Annaleigh Ashford, You Can’t Take It with You

Best Performance by an Actor in a Leading Role in a Musical
Michael Cerveris, Fun Home

Best Performance by an Actress in a Leading Role in a Musical
Kelli O’Hara, The King and I

Best Performance by an Actor in a Featured Role in a Musical
Christian Borle, Something Rotten!

Best Performance by an Actress in a Featured Role in a Musical
Ruthie Ann Miles, The King and I