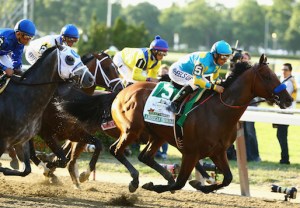 American Pharoah’s capturing of the Triple Crown on Saturday registered a 12.3/27 metered market rating for NBC — the third-best overnight for a Belmont Stakes on record (since 1988).

Coupled with California Chrome’s year-ago attempt at the Triple Crown (which scored a 12.9), it marks the first time in Nielsen People Meter history that successive Belmont Stakes have topped a 12.0 overnight rating.

In the host New York market, the Belmont Stakes drew a 16.6 rating/36 share — up 5 percent from last year to rank as the second-highest Belmont in the market behind only Smarty Jones’ 2004 Triple Crown bid (which did a 20.5/38).

Leading out of the historic horse race, NBC’s coverage of the Stanley Cup Final delivered a 4.8 metered market rating, a broadcast TV record for a Game 2 and up 5 percent over last year’s double-OT match-up between the Rangers and Kings.