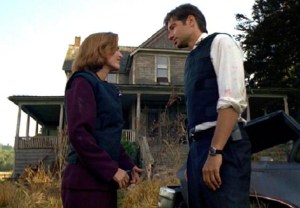 They say you can’t go “Home” again. Well, they clearly have never met Mulder and Scully.

There are early indications that the second episode of Fox’s limited-series X-Files revival may be a sequel of sorts to the seminal, celebrated Season 4 outing “Home,” TVLine has learned exclusively.

For starters, Episode 2 of the six-episode continuation is titled “Home Again.” What’s more, the writer-director of the episode is Glen Morgan, who just so happened to pen the the original “Home” with fellow X scribe James Wong.

Still not convinced the two outings are somehow connected?

Well, both installments are the second episodes of their respective seasons, and the Jan. 25, 2016 air date for “Home Again” comes almost 20 years to the day after the Oct. 11, 1996 broadcast of “Home.”

Remember the freakish Peacock clan at the center of “Home”? Well, “Home Again” may out-Monster of the Week those inbred savages via “Band-Aid Nose Man.” Described as intimidating, odd, weary, creepy and immeasurably strong, Mr. Man is a powerful, violent and frightening “thought” come to life.

Thoughts? Is this just a series of coincidences? A subtle wink to fans? Or do you think “Home Again” is a follow-up to “Home”? Weigh in below!