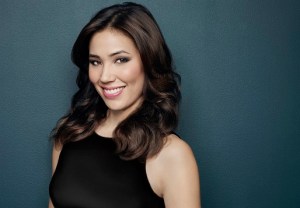 Angela Montenegro she is most definitely not.

On Thursday night’s episode, Bones finally unmasked Angie’s birth name when Hodgins happened upon her passport and discovered that his wife is actually… Pookie Noodlin!

Although Angela described it as something you’d name a pet, she never had it legally changed because it meant something important to her dad.

Behind-the-scenes, the unusual moniker was the combined creation of executive producers Hart Hanson and Stephen Nathan. “[Hart] had a name in the file that he had thought of,” Nathan tells TVLine. “We just put them together.”

“We’ve been making names for years… At a certain point, you just have to jump in the pool,” he adds with a laugh.

Bones fans, what did you think of the reveal of Angela’s real name? Did it live up to the hype? Are you a fan of Pookie?