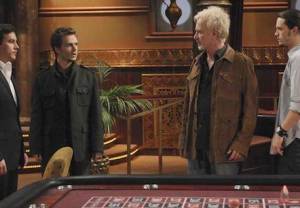 Jonathan Jackson will reprise his role of Luke’s son, Lucky, on the ABC soap, EW.com reports.

Jackson, who now stars on ABC’s Nashville, will return as part of Luke’s — and portrayer Anthony Geary’s — exit this summer.

The Originals‘ Nathan Parsons, who in the past played Ethan, Luke’s other son, also will come back to Port Charles for the event.

In May, Geary announced his plan to retire from the sudser this summer; the series has announced that GH alumnae Genie Francis and Emma Samms — who played Luke’s loves Laura and Holly, respectively — also will return prior to Geary’s departure.

Jackson originated the role of Luke and Laura’s son Lucky in 1993, left the show in 1999, then returned a decade later for a two-year stint before nabbing the part of Nashville‘s Avery.

Parsons, whose Ethan is Luke’s kid with Holly, joined GH in 2009 and left in 2012, returning briefly the following year.