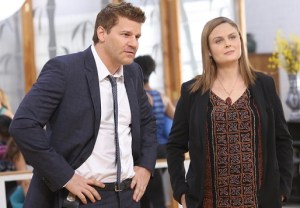 Bones fans, your cries of distress over Brennan and Booth’s recent marital struggles have been heard. But executive producer Stephen Nathan describes the current challenges posed to the couple as a necessary plot device.

“We certainly don’t want [the show] to be predictable all the time,” Nathan tells TVLine. “[The fans would] get bored, and they’d just go watch another show.”

To thwart that scenario, “it’s incumbent upon us to shake it up,” he continues. “We started to do that at the end of Season 10, and it’ll continue into Season 11.”

Below, the EP reveals what it’ll take to make things good between Booth and Brennan and whether or not Angela and Hodgins are packing their bags for France.

TVLINE | How is Booth’s progress coming along with regard to his gambling addiction and the meetings?
It’s unfolding in a very realistic and upsetting way for these two characters. Brennan is a very practical, rational person and understands the risks. Maybe in the past, this would have been a very cold decision for her. The logic she uses on a daily basis certainly comes into play, but there is real pain and difficulty involved in this for her. It’s torturous, because she truly loves Booth. So we had to find a way to deal with that and deal with a very, very proud man in Booth coming to terms with admitting to himself how enormous an act this was and how far-reaching the consequences. What we tried to do in the last few episodes is really contend with the emotional difficulty of that, and then see if there’s some kind of resolution going into the finale.

TVLINE | You mentioned how upsetting it’s been for the characters. The story has also been upsetting for some of the fans who really love Booth and Brennan. What would you say to them?
I’d say I would be very disappointed if people were not upset. These are two characters that you’ve come to love. You have expectations of people that are in your life. You don’t expect them to do this, and so you get upset. But you know what? People usually surprise us, and they do things often that we think they’re better than… And that goes for Brennan, too. Her reaction was very severe. But that’s what happens.

TVLINE | What does Brennan need from Booth to make things OK between the two of them?
It appears as if she needs some concrete evidence that he won’t do this again or that he is the man she thought he was. Since there are no guarantees, all she can hope for is to see the man that she thought he was… That’s the only thing that ultimately turns us in situations like this. Because every promise in the world is meaningless. You just have to decide, “OK, are we going to do this together?”

TVLINE | So far, Angela and Hodgins’ plans about Paris have been all talk.
What has been historically all talk between them about this Paris trip becomes much more concrete. It’s a very real choice now. Money has been exchanged. [Laughs] They’re going. That’s what they’re doing. Again, it’s our expectations [with] our characters that get us into trouble, because they don’t always behave as we expect them to.