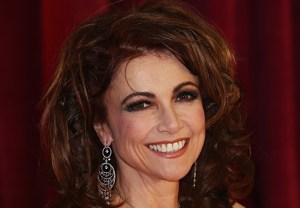 Emma Samms, whose Holly Sutton-Scorpio was once involved in a love triangle with Luke and Robert Scorpio, will reprise her General Hospital role ahead of Anthony Geary’s departure.

.@EmmaSamms1 is coming back to @GeneralHospital !! Very excited!! #GH

Samms last appeared on the show in Aug. 2013, as Holly searched for Jerry Jacks and his cure for polonium poisoning. No word yet on what will bring Holly back to town this time.

As previously reported, Genie Francis will return as Laura on Friday, June 5.

* ESPN announced Monday that Caitlyn Jenner — who was formally introduced on the cover of Vanity Fair — will receive the Arthur Ashe Courage Award at the 2015 ESPYs, airing July 15 at 8/7c on ABC.

* Psych creator Steve Franks has signed on as showrunner for Rush Hour, CBS’ midseason adaptation of the movie franchise. Franks will oversee the drama and exec-produce alongside Cougar Town‘s Bill Lawrence and Blake McCormick.

* Chris Warren, Jr. (High School Musical) will recur on The Fosters‘ upcoming third season, bowing June 8 at 8/7c. Per The Hollywood Reporter, he’ll play Ty, a young man who has aged out of the foster system and becomes separated from his younger brother.

* Netflix has moved up the release of Pretty Little Liars Season 5 from June 10 to Tuesday, June 2 — aka tomorrow, aka the day of the Season 6 premiere.