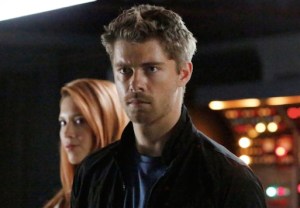 Having brought a certain… electricity… to the proceedings on Marvel’s Agents of S.H.I.E.L.D., Luke Mitchell has been promoted to series regular for Season 3, TVLine has learned.

The Aussie actor — who previously wielded mad skillz as one of The CW’s The Tomorrow People — made his S.H.I.E.L.D. debut this April as Lincoln, one of Skye’s first Inhuman allies at the Afterlife compound.

In the ABC drama’s sophomore finale, Lincoln juggled allegiances when Afterlife leader Jiaying launched an attack on the S.H.I.E.L.D. carrier, but he last we seen helping Skye and May ward off a “ginger army” (i.e. a replicating Inhuman).

Are you glad to see Mitchell log more time as Lincoln?