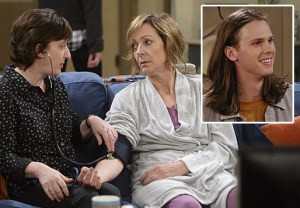 Mom will be down one boyfriend — but up a girlfriend — for Season 3.

TVLine has learned exclusively that Spencer Daniels, who plays Violet’s baby daddy Luke, will not be a series regular when the comedy returns next fall. The change doesn’t come as a big surprise, as Daniels’ character did not appear in the final 14 episodes of Season 2, getting phased out after Violet gave her baby up for adoption.

Meanwhile, Beth Hall (AKA “Weeping Wendy”) has been promoted to series regular for Season 3, though she will not appear in every episode.

Hall recurred in Season 2 as Christy (Anna Faris) and Bonnie’s (Allison Janney) new friend from AA with a penchant for bursting into tears. The actress is best known for her role as Caroline, Roger Sterling’s assistant, on Mad Men.

In March, CBS announced that guest star Jaime Pressly would also be a series regular for Season 3; Pressly’s Jill is the super-wealthy pal who chooses Christy as a sponsor on her road to sobriety.

Excited about Wendy being a more regular part of the Mom mix? Sound off in the comments!