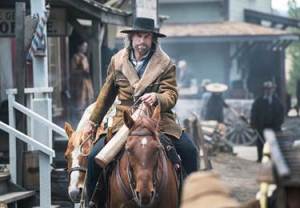 Hell on Wheels‘ fifth and final season will leave the proverbial station this summer.

AMC confirmed Thursday that the railroad drama will return with the first half of its 14-episode season on Saturday, July 18 at 9/8c. The second half will air in Summer 2016.

Here’s an official Season 5 teaser: “Cullen Bohannon (Anson Mount) finds himself a stranger in a strange land — the mountain town of Truckee, Calif., home to the Central Pacific Railroad. This rough railroad town teems with thousands of Chinese workers, foreign in language, culture and traditions. Despite the challenges of corralling his new workforce, Cullen leads the Herculean effort to tunnel through the Sierra Nevada Mountains, sometimes achieving only inches a day in the race to complete the first Transcontinental Railroad.”

AMC announced in November that Wheels‘ upcoming fifth season would be its last.