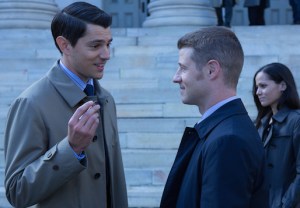 Fox’s Gotham is looking to make a significant Dent in Season 2, by promoting Nicholas D’Agosto to series regular status.

The Masters of Sex and Heroes alum debuted on the DC Comics-based drama midway through Season 1 as freshly minted ADA Harvey Dent, one of Detective Jim Gordon’s precious few allies in the fight against all that is wrong in the titular city — and a person with his own particular, two-faced destiny.

D’Agosto shared the news of his promotion via the Twitter:

Thank you to all of you @Gotham and #HarveyDent fans for your enthusiasm. I can't wait to join more of the fun as a regular in Season 2!