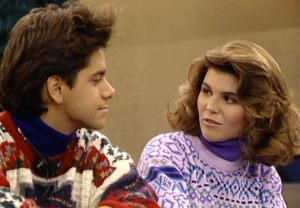 The actress told People that she has joined the cast of the comedy, which finds two of Full House‘s Tanner sisters, DJ and Stephanie, living together with pal Kimmy after the death of DJ’s husband.

Loughlin’s onscreen love, the girls’ Uncle Jesse, will show up when original series star John Stamos appears as a guest star. (He also will serve as one of the series’ producers.)

Other previously reported returnees include Candace Cameron-Bure, Jodie Sweetin, Andrea Barber and Dave Coulier. Mary-Kate and Ashley Olsen, who jointly played the moppet Michelle, will not be part of the cast.