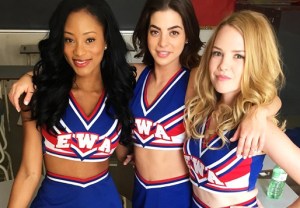 Cheerleader Death Squad, an hour-long drama about a former CIA agent who trains high school cheerleaders for covert missions, seemed like a perfect fit for The CW — but when pickups for the 2015-2016 season were announced, there was nary a pom-pom in sight.

“The best way to describe it is that there were some creative differences … that weren’t illuminated until we were very close to shooting,” executive producer Sabrina Wind tells TVLine. “By the time we learned what it was [The CW] wished they were getting from us — or what they needed for their viewership, versus the story we were on course to tell — there wasn’t enough time to course correct. So we shot the pilot and talked about whether or not we could change it enough to make it more of what The CW would have wanted in the end. They’ve invited us to possibly keep working on it, but we’re not sure what we’re going to do. There was just a feeling that it wasn’t quite ready at this time.”

But don’t despair, Squadders — or however fans of the potential series are choosing to identify themselves — because it sounds like the cheerleaders could live to fight, cheer, etc. another day. 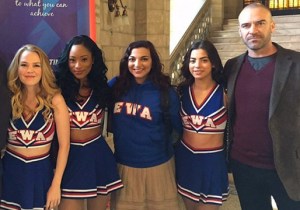 “Either we’ll redevelop it, or you might see it come out in a different form,” Wind says. “[Writer/producer] Marc Cherry and I are working on all sorts of ideas with it.”

That said, don’t expect to get your mitts on the pilot as it currently exists. In fact, Wind says it’s so unavailable that “one of the actresses is desperately trying to get a hold of it to show to her mom and we can’t seem to get a copy of it for her.”

“But that’s the way this business works,” she concedes. “They’re very protective of things, especially things that will not be seen on air.”

Are you keeping your fingers crossed for a Death Squad revival? Drop a comment with your thoughts on the potential series below.