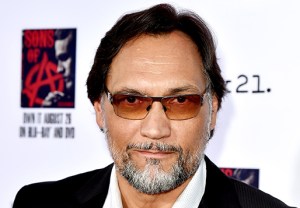 The Sons of Anarchy alum will next be seen in The Get Down, Baz Luhrmann’s upcoming Netflix musical drama.

Set in 1970s New York City — during the birth of hip-hop, punk and disco — The Get Down centers on a ragtag crew of South Bronx teenagers who have no one to shelter them except each other.

Smits will play Francisco “Papa Fuerte” Cruz, a South Bronx political boss who delivers services that the city fails to provide, including jobs and housing.

He joins a cast of up-and-comers, including TJ Brown, Justice Smith, Shameik Moore and Skylan Brooks as the quartet at the heart of the story, and 18-year-old Herizen Guardiola as Papa Fuerte’s niece, Mylene Cruz.

* Joanna Gleason (The Good Wife, The West Wing) will recur on The Affair‘s sophomore season, our sister site Variety reports. She will play Yvonne, the editor-in-chief of a prestigious publishing company who has a connection to Dominic West’s Noah.

* Ahead of Mr. Robot‘s June 24 premiere, USA Network has made the pilot of the Christian Slater drama available to watch here.

* John Michael Higgins (Wilfred) and Paula Marshall (Murder in the First) will guest-star on the upcoming season of Switched at Birth, ABC Family announced Wednesday. The pair will play the parents of Daphne’s boyfriend, Mingo.