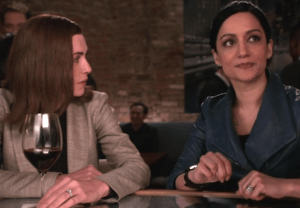 Out promoting her new earthquake movie, Archie Panjabi weighed in on the Good Wife finale scene that got the Internet rumbling.

As reported by TVLine’s Michael Ausiello earlier this month, the season-ending meet-up between Alicia and Kalinda — the onetime gal pals’ first such face-to-face in a lonnnng while — was pulled off using body doubles and computer trickery, with Julianna Margulies and Archie Panjabi never actually in the bar scene together.

And Panjabi, when given an opportunity to weigh in on the reported CGI use, didn’t deny that some crafty cobbling was required.

“All I can say is this: the decision-making process is not something I’m privy to,” the actress told E! News Tuesday at the Hollywood premiere of the disaster pic San Andreas. (A CBS spokesperson declined to comment for TVLine’s original story.)

Panjabi also told E! that it’s unlikely Good Wife viewers will see Kalinda again, even though her exit storyline allowed for an eventual encore. “She came in as a mystery and left as a mystery,” said her portrayer.