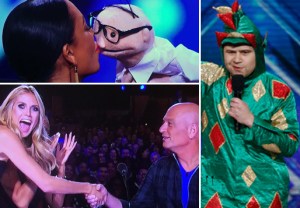 Does Mel B. have a puppet fetish? Who would Heidi Klum like to see pants-less? And which dancing duo is so sweet it (allegedly) gave Howard Stern diabetes?

These questions — and so many others we didn’t even know we had — were answered Tuesday during the Season 10 premiere of NBC’s America’s Got Talent., which features acts ranging from hypnosis to acrobatics to professional cuddling. (No, you didn’t misread that last one.)

The premiere also introduced the Golden Buzzer, a one-time-only opportunity for the judges to send an act straight to the live shows. And just when it was starting to look like the two-hour event would end with nary a golden buzz, along came disabled comedian Drew Lynch, who had the judges eating out of the palm of his hand from the get-go.

All right, it’s time to weigh in: Which season premiere act was your favorite? And which big moments will you be reliving on your DVR tomorrow? Browse our gallery of most memorable auditions below, then drop a comment with your own thoughts.