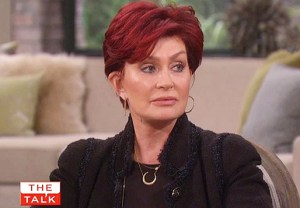 The Talk is temporarily losing its most recognizable voice.

After collapsing from “mental and physical fatigue” in her Los Angeles home on Friday, Sharon Osbourne is taking a monthlong hiatus from the CBS daytime talk show, our sister site Variety reports.

“Her doctors report that she is suffering from ‘extreme exhaustion’ and assessed that she most likely returned to work too soon after being hospitalized recently for pneumonia,” reads a statement from Osbourne’s rep. “Sharon has been advised and has agreed to to take a month hiatus to recover fully from these recent events.’

Osbourne recently signed on to lend her voice to the MTV pilot Lucky Bastards, opposite daughter Kelly, who recently mad a very public exit from E!’s Fashion Police.

They had also both planned to appear in VH1’s revival of The Osbournes, the reality show that skyrocketed the family to superstardom in the early ’00s, but the project has since been scrapped.

Will you miss Osbourne on The Talk, or are you just glad she’s getting the rest she needs? Drop a comment with your thoughts below.