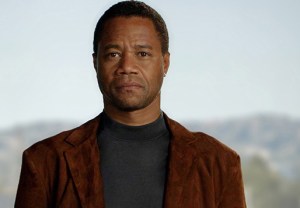 Warning: The photos you’re about to see can never be unseen — not that you’d want them to.

As head prosecutor Marcia Clark, Paulson trades her long locks for a tight mane of curls — but who wore them better, Paulson or Tina Fey in Unbreakable Kimmy Schmidt?

And don’t think we forgot about John Travolta as Robert Shapiro, also a member of Simpson’s defense team. (We just got lost in his eyes for a second.)

Browse our gallery of Crime Story‘s primary cast members below, then drop a comment with your first impressions.