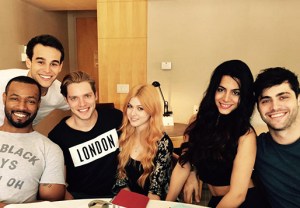 After weeks of reveals met with unprecedented fanfare on Twitter, the primary cast of ABC Family’s Shadowhunters is finally intact and in the midst of its first week of rehearsals in Toronto. If any part of this is news to you, allow me to bring you up to speed.

Fans of Clare’s books, as well as the 2013 movie, will notice that several changes have been made on the journey to the small screen — Clary, for example, is a few years older on the show, and Luke has been rebranded as an NYPD detective — but the heart of the franchise remains very much intact.

Browse our gallery of Shadowhunters‘ key players below, complete with full introductions to each, then drop a comment with your thoughts on ABC Family’s supernatural drama.