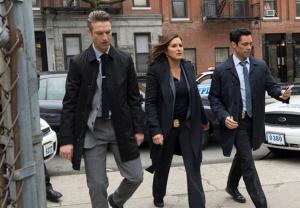 The following story contains spoilers about Wednesday’s Law & Order: SVU finale, so hit the nearest exit if the episode is still sitting on your DVR.

When Law & Order: SVU kicks off Season 17 this fall, it will be down an officer.

In Wednesday’s finale, a near-death experience prompted Det. Nick Amaro to make a major life change: he informed Olivia that he was leaving the NYPD and relocating to the West Coast to be near his family. And the decision will stick, as TVLine has confirmed that his portrayer, Danny Pino, will not be returning to the show next season.

“It seemed to be, in a strange way, right for Amaro to start fresh somewhere else,” showrunner Warren Leight told TVGuide.com. “It’s not to say any of us enjoys it, but it seems like that’s where the story was going and I think all of the actors felt like the exit was honored.”