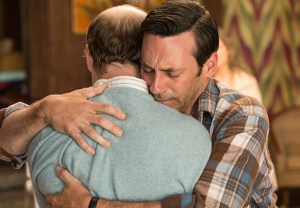 Versus last summer’s Season 7A finale, Mad Men surged 74 and 64 percent. TVLine readers gave the series capper an average grade of “B.”

In total viewers, the series finale was only bested only by the Season 5 premiere (3.5 mil) and the Season 6 opener (3.4 mil).