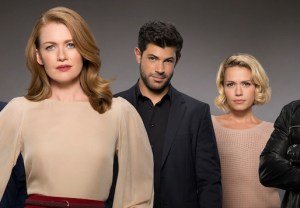 If you (like us) were digging Bethany Joy Lenz‘s edgy look and naughty aura in the trailer for ABC’s new Shondaland drama, The Catch, here’s a bit of bad news.

The One Tree Hill alum revealed via WhoSay that the midseason series is seeking “a different type” to play her character, Zoe.

The Catch stars The Killing‘s Mireille Enos as Alice, an elite fraud investigator who ironically finds herself the victim of a long con perpetrated by her fiance Kieran (Dayoub). Lenz’s character, Zoe, is Kieran’s actual wife.

“But please still watch!” Lenz urged fans. “It really is SUCH a good show and I’m so proud of my friends’ work!”

Recasting or reconsidering roles after a pilot is filmed and sold to a network is not at all unusual. Already this Upfront season, CBS has decided to revisit the Criminal Minds: Beyond Borders ensemble, moving forward without Anna Gunn (who appeared in the planted spinoff), while our sister site Deadline reports that ABC’s Wicked City and NBC’s Heartbreaker are also recasting roles.

Watch the Bethany Joy-ful trailer for The Catch below: