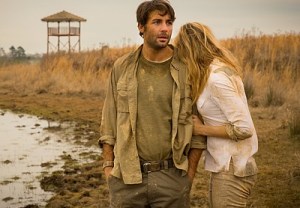 Based on James Patterson’s book of the same name, the drama chronicles what happens when “the animals decide… they’ve had enough,” explains executive producer Jeff Pinkner, “[and] it’s time to fight back.”

Despite the scary nature of the premise, fellow EP Scott Rosenberg insists, “Nobody wants to create an environment where [viewers] are anti-animal.” That said, “We want the whole world to fear their Schnauzer,” he adds. “Then [we know] we’ve done our job right.”

Ultimately, Rosenberg notes that the cast of characters, led by James Wolk’s renegade biologist Jackson Oz, “want to heal the animals… that they love.” And even though their actions are grisly, “the animals, in a strange way, are the hero[es]” of the story, Patterson maintains.

Meanwhile, fans of the novel shouldn’t assume they know how the series will end. “It’s going to change a lot from the book, which is excellent,” the author says. “They have 13 [episodes], so there’s no excuses. In this case, I do think the [show] is going to be better than the book.”

Check out the trailer below and then hit the comments with an answer to this question: Will you be visiting CBS’ Zoo?