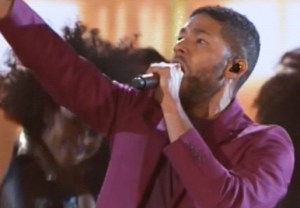 Desperate for your Empire fix during this long summer hiatus? Don’t worry, ABC’s got you covered. (No, I didn’t mistype “Fox.” I meant ABC.)

In a super-weird — but not at all unwelcome — network crossover, Jussie Smollett and Bryshere Yazshawn Gray took to the Billboard Music Awards stage Sunday as their Empire characters to perform the Lucious Lyon classic “You’re So Beautiful.” (Question: Was I the only one wondering whether Smollett would sing “…man love a man,” only to be disappointed that he didn’t? This was surely Lucious’ doing!)

Estelle, who guest-starred in Empire‘s freshman season as Delphine, also joined Smollett for a bombastic performance of “Conqueror” (which sounded good, even if it’s literally no one’s favorite song from the show).

Naturally, the performances — video will be posted here when it becomes available! — were introduced by “proud” mama Taraji P. Henson.

Your thoughts on the Empire stars’ performances? Drop ’em in a comment below.